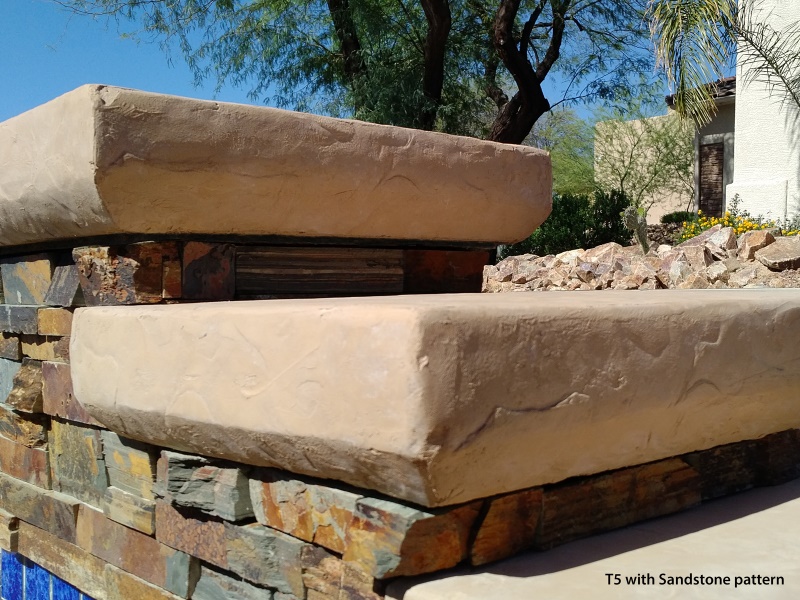 Well, lots of reasons, but the four most important are..

From 1962, Kool Deck is the premier heat reducing surface available for barefoot areas. No other polymer cement overlay, paver, or stone comes close.

By stamping Kool Deck, any type of modern travertine, slate, stone, granite or other low-relief pattern textures are possible. Make it look the way you want!

As a pure cementitious overlay, Kool Deck endures freeze-thaw, blistering sun and wet conditions with hydrostatic pressure as it expands, contracts, and the concrete can breathe.

Kool Deck doesn’t require slick, glossy (or matte) sealers to keep the elements from beating it up. It can look just like natural materials you use elsewhere in your hardscapes.

Now with two methods of application, Kool Deck is versatile as ever! Whether you are doing a new or renovated deck, look no further than this timeless material as a perfect complement to your design.

Most people designing their backyard oasis want it to be perfect. Unfortunately, most of the deck options offered by companies are either too hot, expensive or downright unsafe. See how Erik and Holly figure out a solution to their dilemma!

It’s getting harder in this world to spot the real from the fake, whether it’s news or decking products.
We’re here to give you the skinny on what definite indicators scream knock-off:

If you see a hopper gun, run. While it works for knock-off (oops, knock-down) polymer toppings, just not Kool Deck. Stamping Kool Deck is awesome – no hopper guns and air compressors.

Not a single component of Kool Deck, a pure cement based overlay, ever sees a paint roller for application. That’s because it’s not a polymer modified cement. Never has been, never will be.

Ever seen “shiny” flagstone or slate in the wild? Neither have we. Shiny, slick sealers create safety hazards because of the lack of traction and the heat generated. It’s best not to start with slipping.

“It’s just like Kool Deck but better” or some variation of Cool or Kul Deck used in their literature, spells trouble. Be exacting, demand genuine Mortex Kool Deck® in your contracts!

Some rely on myths, distortions or other falsehoods to sell their inferior products. Check out our, Legendary Myths of Kool Deck, which destroys peddled misnomers.

Develop a look with high detail and durability without slick, hot, polymer products.

A HISTORY OF THE PRODUCT THAT STARTED IT ALL

After 55 years, we have some perspective on the concrete industry, our product, and where things are going…

Yes, we’re serious! With our new revolutionary release powder, a stamped Kool Deck is both an easier surface to apply with better durability. Compressing the material into the surface, in your chosen pattern, makes a harder surface with better adhesion to the base concrete.
Unlike the traditional, splashed application, stamping Kool Deck requires fewer people with less artisan skills needed.

We’re known for a lot of good qualities, and incorrectly for some others.
If anyone can set the story right, it’s straight from those who really know the truth.

Kool Deck can be applied to BOTH new and existing concrete!

Unless the applicator has been sleeping for the past quarter century, our PTA Bonding system allows Kool Deck to be applied to any concrete surface from a day old to decades.

If you have seen this myth, it is mostly from people that either don’t know about PTA or want to sell something else. To apply any overlay on existing concrete, there is some surface preparation (and when isn’t there surface preparation). It’s relatively easy to get a great bond with Kool Deck to the concrete when done properly.

Mortex provides significant resources for helping contractors on how to properly prepare a surface for using PTA Bonding Agent. Click through the link here to learn more and watch our videos for best practices.

Salt actually eats on everything, except Kool Deck.

When Salt Chlorination systems became popular, we saw some decks start to fail. This was not surprising to Mortex as concrete slab quality was already decreasing (less cement weight, etc) and unfortunately many placed blame when they should have been looking a little deeper. In our experience, almost all deck failures related to salt, the underlying concrete surface interface was deteriorated, leaving the Kool Deck intact but attached to nothing.

Sodium chloride ions attack Portland cement and not much with marble sand and white cement – both ingredients used with Kool Deck. We have conducted testing with our friends at Pool Chlor, of which we subjected samples to everything from distilled tap water to highly concentrated salt solutions. No failure of Kool Deck ever occurred. Look for yourself, what happened to the highest concentration sample: During this same era, many polymer spray decks fared much better against the salt systems only because they “sealed” off the concrete below, and when they didn’t, they failed even faster than Kool Deck.

We highly recommend helping the underlying concrete by using our Protect-A-Deck waterproofing agent on any Salt Chlorinated pool, as it will significantly slow the transition of salt water through the surface.

If a “stucco finish” made it cool, we wouldn’t exist.

With the advent of spray polymers, their whole focus was to “look” like a Keystone Kool Deck. But it doesn’t, and it sure doesn’t feel like one when the heat is on. You will hear it called, “Knockdown”, “Lace”, “Stucco”, etc. Many of the sales schticks will conflate the surface texture with coolness – do not be confused. While there is some benefit to a true “Keystone” Kool Deck finish, there’s just not enough height in a less-than-sixteenth inch surface to provide less surface area for foot pressure with a polymer spray decking.

Kool Deck has never been a paint, nor will it.

As stated in our guide on Kool Deck imposters above, the knock-off products of the decking world love to have you believe they are equivalent to a superior Kool Deck surface. If you see any of the halmarks listed above, run away. They also will neglect to inform their customers of the true maintenance cost of a painted surface, which is pretty significant. Most decks will require repainting on a three to five year window (some cheapo varieties even sooner), but that isn’t a problem to them – it’s a feature. They like having the repeat service work, but we expect your pocketbook does not.

Any surface is only as good as its installation…

With quality concrete contractor skills in low supply, you end up get people cutting corners and just flat out doing it wrong. Splashing, mixing, and applying a proper Keystone Kool Deck has been an artform from the begining. While reasonable simple, the instructions not followed will cause craze cracking (from too much water) to premature failures from poor timing to the underlying surface. Stamping Kool Deck, while not making it completely fool-proof, definitely helps make the installation less daunting, more consistent with better durability. So, if you want to get the best, due dilligence still reigns supreme. We reccommend to do your homework on a few companies by seeing recent work and distinctly specifying genuine Kool Deck by Mortex!

Well – that was the case but it’s not anymore!

With contractor crews shrinking over the years, we recognized that those challenges end up forcing the choice of materials used, irrespective of what the client wants. By stamping Kool Deck, the recommended crew size for that method is only a minimum of 3 people, with preferably 4 or more depending on attempted square footage and selected pattern (some patterns are easier that others). If applying a traditional Keystone Kool Deck, then that recommendation of six or more people is still valid. Stamping Kool Deck, while not making it completely fool-proof, definitely helps make the installation less daunting, and great for smaller, nimble crews to our the surface done right!